This week’s Daily Post Writing Challenge is a creative writing prompt: A picture is worth a 1000 words. 1000 words on this picture that the Daily Post provided. See links below and in the comments on the Challenge post for what others wrote about the same photo. Maybe a picture is worth more than 1000 words after all! Here are my 1000 words, a fictional story inspired by the photograph: 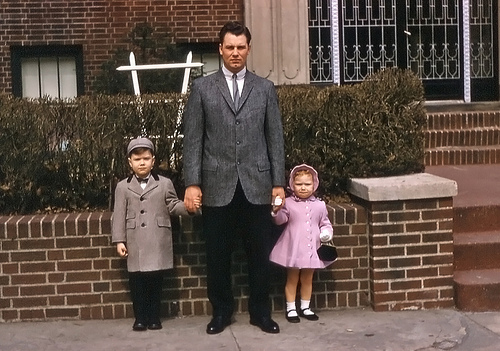 It is one of those days — one of those memories — I don’t think of too often, but when I see that photograph, my sister and I standing there holding my father’s hands, I’m sure that I will never forget — have never forgotten — that day.   But, the thing is, I don’t know if I really do remember it.  Maybe I only remember the photograph from its perch on my mother’s dresser.   I wonder if it helped her to remember.

The three of us in front of our building on a cold Spring day.   My dad never wore a coat after March, so it must have been early April.    Years later — during my punk rocker days in the 80’s — I had a skinny, grey tie just like his.  My hair was dark like his too in the 80’s.   Without the Brylcreem look.  I thought it looked natural. Never would have had a sports coat, though.

In the photo, I’m wearing a coat that had this stupid velvet bit around the neck.  It was really itchy.   I remember my mother leaning over me to button the coat and straighten my tie.  Her perfume was strong and she was careful not to get any of her makeup on me. She kissed the top of my head before she put on the hat.  I got lipstick on your hair.  Now you have to wear your cap so it doesn’t show in the picture she said.  My sister had a new coat too.  She could barely say the word pink but we all knew it was her favorite.  Pink is still her favorite color.  The two of us haven’t changed that much I suppose — she loves pink. I hate coats and ties.  My father?  I don’t remember my father any other way except how he looks in that old photo.

The old apartment building.  Mother used to send us to the basement to play among the storage units and the washers, avoiding the Super, in the days after this was taken.  Later in the Spring, there were flowers growing up that trellis, though she wouldn’t have planted them.  Mother wouldn’t have noticed those bits of pink and red that showed through the window of our street-level apartment.  I don’t know.  Maybe she never opened the blinds.  It was always dark.

My sister says that she remembers her coat.  Pink with white pearly buttons and a bonnet to match.  No, the roses in front weren’t pink, she tells me, but she doesn’t remember what color they were.   I remember the color; she remembers the flower.   And that coat, she exclaims.  My first new coat!  Her chubby little legs must have been freezing.   I think she only remembers from the photograph too, but she insists.

My mother’s handwriting scrawled on the back:  Easter Sunday, 1961.   The year is certain, but I don’t ever remember going to church.  Isn’t that what families do on Easter?  Go to church?  Maybe that was the last Easter we went.

Or maybe we were only going to my grandparents.  Mother would have made me wear a bow tie for that.  My perfect little gentleman! my grandmother would sing.  Maybe I was that way in first grade.  But I can look behind my eyes in that photograph and see the truant, the troublemaker, the punk that I surely always was but had not yet become.  I wanted to run and play, get away, not smile for a silly photo.  Even  at age five I knew it was all crap.  I’m sure of it.  I must have known.

Do I remember my father that day?   Do I remember his frown?  My sister and I were mimicking him.  Did we really look that much alike?   Do we always have a look of fleeing on our faces?

Daddy yelled at us to be still, my sister states.  She tells me that I kept squirming out of the frame until he took my hand.  He yelled at Mother too, telling her to hurry up and press the damn button.

Would he have said ‘damn’?  I asked.  She remembers it that way.   I see it in the photograph.   Perturbed.  Annoyed.   Press the damn button, will ya?  That was what made my sister cry.  In her pretty pink Spring coat and being yelled at.   I remember it now that she mentions it.

No wonder I wanted to pull away.   Wanted to run away.  Away from my sister.  Away from my mother.  Away from my father.   To the playground or the ball park.  Later to some parking lot where I could smoke a cigarette and talk about chicks with my friends.   Run away from all that stifled and cramped and itched like that grey coat and hat.

Yea, I remember it alright.   Like it was yesterday.   Because, after that day, it was my whole life.  Wanting to run, just like my dad.  Away to someplace mysterious where there weren’t ties and suitcoats and hats and wives who wanted to take pictures and drive to the grandparents on Easter Day.

I remember that photo in its place of honor on my mother’s dressing table for years.   I wondered if it helped her to remember him or to forget him.  My sister says it was to remember him.  The whisky was to forget.

For me, I remember that as the last time I saw my father although history tells me something else.   But, the photograph, the three of us standing there in front of our building trying to look like it was a happy occasion:  that I remember.   Mostly grey, a bit of pink, but no details about what types of flowers colored my Mother’s world.

How can you remember it that way? my mother protests.  It was a happy day!  My sister smiles.  I guess I never could talk to them.      I remember the photo, Mother, I reply.   On your dresser.  In a brass frame.

A few other Picture Worth A 1000 Words for the DPChallenge: