Sponges grow in the ocean. That just kills me. I wonder how much deeper the ocean would be if that didn’t happen. ~ Steven Wright

It was still dark outside when my alarm sounded this morning. Usually, when on vacation, I don’t use the alarm unless I have a plane to catch. Today, though, I wanted to catch the full moon setting, the low tide, and sunrise, just before 7 am.

The sky was just beginning to lighten when I walked out on the beach, wondering if my fleece jacket would be warm enough. The moon was glowing in the northwestern sky, looking like a giant Japanese lantern hanging over Sanibel. In Colonial America, the January moon was called the Winter Moon; the Cherokees called it the Cold Moon; the Celts, the Quiet Moon; and the English referred to it as the Wolf Moon. On a subtropical beach, just before a warm winter day, only the Celts seemed to have captured this particular January moon.

I turned towards the south and headed towards the shoreline. The tide would still be moving out for another 20 minutes. The shorebirds had positioned themselves at the very edge of the water; the little squeaky sandpipers running when a wave reached back towards the sand; the larger terns merely lifting one webbed foot as if they couldn’t be bothered. Some of the more industrious birds bobbed for fish or cracked open shells. The less energetic ones merely lowered their heads into the surf, as if they had already had their fill at the morning tidepool buffet. 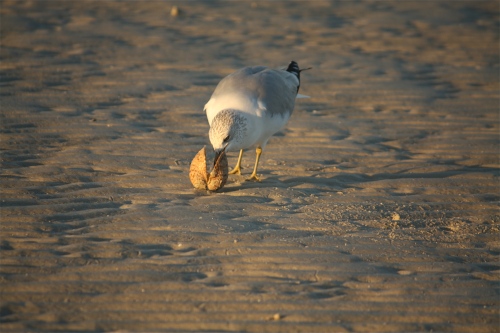 Cockles: Not a Hard Shell to Crack

As I walked gently through the blubbery sand, I looked at all of the creatures left behind by the retreating waves. I don’t know how they survive, or even if. Are the ones that are exposed by the tide the ones who are living their last moments? Or will they be rescued when the tide pushes back towards the beach, the water trying to reclaim its rightful inheritance and dominion over the planet? I am witness to the struggle near my feet: a starfish has left tracks in the sand; a whelk seems destined for someone’s shell collection — why I think would anyone want one of these? how out-of-place would it be sitting on a shelf or in a basket, bereft of sand and salt and the smell of the sea? — when the shell’s inhabitant extends itself out. A quiet wave washes in and removes more sand from beneath the shell. The mollusk continues to show itself. Suddenly I realize that it is righting itself, repositioning in order to burrow further down into the wet sand. I turn it over with my foot to look at it once again, but immediately feel guilty for doing so. I pick it up and loft it towards the sea. You’ll live to swim another day I think, and then wonder, noticing that the beach is beginning to be populated with walkers and bikers, if I said the words aloud. Later, when reading about the sea creatures I photographed, I learned that the word whelk may have come from the Proto-Indo-European root for “turn or revolve”. It is as fitting, I decide, as calling them gastropods, the larger classification of this sea snail. I wonder about that word too, and the very idea of a “stomach-foot”: is it the ultimate in efficient design to have one appendix to capture your prey, to eat and to move?

Left by the tide 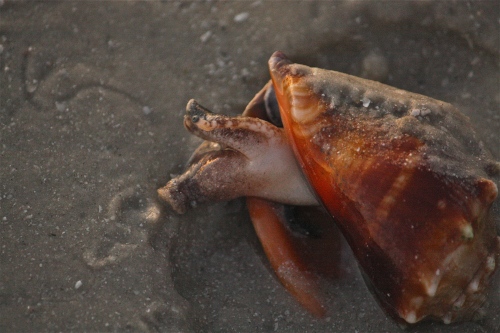 Not Quite High and Dry

I didn’t wander too far down the beach before the sun started to rise. I now had more light to shoot, but the bright, rising sun, still low on the horizon brings other photographic challenges. I turned to head the other direction. Although I knew the time of moonset, it surprised me that the moon had retreated so quickly. I see a few more interesting creatures, mostly sea anemones and heart cockles. I click away, happy that the sun is bouncing off of the pearly nacre, in awe of what marvelous mysteries the sea has deposited at my feet this morning.

Nature is so powerful, so strong. Capturing its essence is not easy – your work becomes a dance with light and the weather. It takes you to a place within yourself. ~Annie Leibovitz

About a year ago, after random sightings of  unusual things on my way to work — a flock of turkeys in a suburban front yard, for instance — I began to think that there should be some blog/twitter feed/tumblr-like thing similar to “The S*** So & So Says”, except for spottings of wonderous things.   I know how to be snarky — I used to take pride in being able to have the most succinct cutting retort — but at this point in my life, I prefer to NOT be that way; it takes too much energy.  Instead, why not focus on those odd things that are probably right in front of your eyes all the time, but only on occasion truly seen for the amazing creations that they are.  Besides, experiencing something of beauty is so much more fun that dishing out snark.

That was before I started blogging again.  I had thought about calling it “By The Side of the Road”.   But, I never did anything about that.   What I did do, though, was to try to be more aware of things that I passed everyday — while still keeping my eyes on traffic if driving! And, the rewards have been great, even if only measured by number of smiles.

The more I photograph, the more I think I’m becoming attuned to finding the unusual. Maybe it has nothing to do with the camera but has every thing to do with being open to finding something that will amaze and delight you. Today, when I was on a walk — without my camera — I came across the most remarkable thing: I’m not sure what it is — a seed pod of some sort?   I’ve walked this part of the greenway for 4 out of the last 5 days, but never noticed this.   This morning, the deep maroon color jumped out at me from about 10 feet away, contrasting with the light wheat-colored grasses, the dark brown trunks of the ash trees, and the beige, green and white bark of the birches.  I immediately left the trail to investigate.

Beauty by the Side of the Road

This shot was taken with my just-a-step-beyond-rotary-dial camera phone. It isn’t obvious from this photo, but this purple pod was in the middle of a thorny stem. It is as is a stem grew upward, developed a seed pod, then continued growing out the other side and down towards the ground. I will have to walk back this with with a camera in the future.

What have you seen today that amazed, delighted, caused wonderment, made you smile?