There is pleasure in the pathless woods,
there is rapture in the lonely shore,
there is society where none intrudes,
by the deep sea, and music in its roar;
I love not Man the less,
but Nature more. 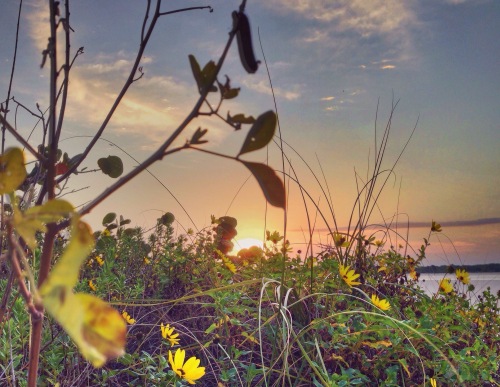 A few shots from around my pond.  This is my little garden oasis, whether I’m working on the “weeding” of the algae or sitting nearby listening to the waterfall. 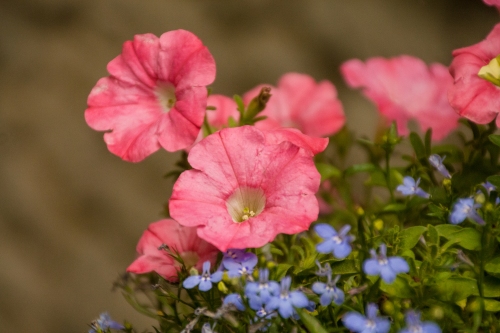 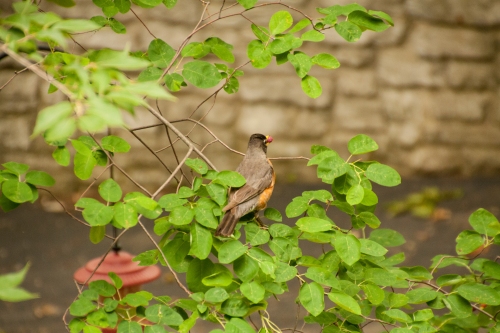 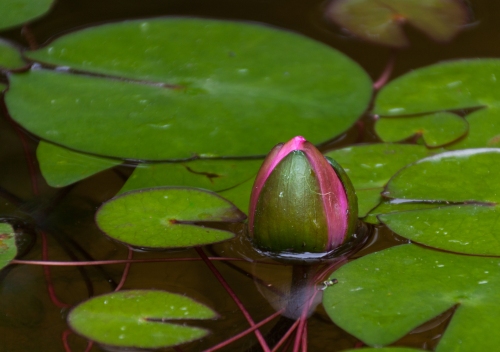 Unfortunately, the critter in photo #6 is the main suspect in the disappearance of several of the critters in photo #2.  On one hand, he is an uninvited inhabitant and I wish he would go away.   On the other, he may soon be the sole occupant so I’m wondering if I should name him.  Appropriate name suggestions welcomed in the comments section!

I had just finished posting my previous post when I saw that Ailsa had posted her theme for the week:  Rivers.  So, why not another photo taken on my recent trip?  This one was taken on the same day as the photo of the  Martinus Nijhoff bridge though I’m not certain how close this was to the same area.   Regardless, on that lazy Friday morning, we saw many cows, sheep and horses spending their days in what seemed like an idyllic way:  lazying along the shores of the River Waal.

Suntanning cows on the river’s shore

Yesterday, I took my first walk this Spring (as opposed to my last walk of winter last week) along the Greenway Trail near my home.  It still looks a lot like winter, but everywhere you go, there are the tiniest hints of Spring’s arrival.   The first shot I took — one that I won’t be able to take in a few months as the growth along the creekbanks will obscure this particular view — was of the creek and the beautiful reflections of the trees.   Perfect for this week’s WordPress Weekly Photo Challenge.

Fall Creek is bigger than most “creeks” around here, but it isn’t as big as a river, at least during parts of the year.  When the snow began to melt a few weeks ago, you couldn’t even walk on the paved trail, which is several yards away from the creek.  The water has receded now, but there are plentiful signs that the area was recently flooded.

After The Water Receded

But, I didn’t have to walk very far before I saw the first buds on trees:

On the walk back home, I snapped a quick shot of the roadway, and then a few in my yard.  Again, from a distance it still looks dreary, but slowly, imperceptibly, Spring is awakening.

The first daffodils peaking their heads above the ground.

As Thoreau wrote in Walden, “They were pleasant spring days, in which the winter of man’s discontent was thawing as well as the earth, and the life that had lain torpid began to stretch itself.”

While I’ve been better about taking the photos on time for my 2013 monthly project, I haven’t been prompt about posting the results here.   As I have done throughout 2013, I’ve taken a photograph at least once a month, usually at the beginning of the month, of the oak tree that towers over the hillside behind my house.   (You can see other posts featuring the monthly photos here.)

In early November, the tree was just beginning to turn:

By December 1, all but a few leaves were gone: 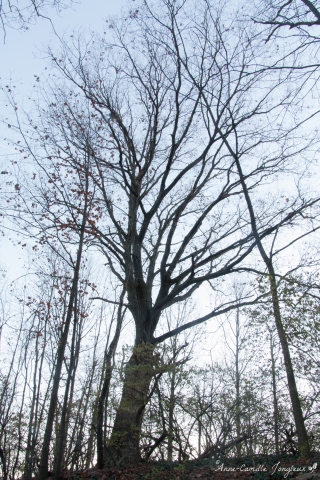 A few days into December, we had our first real snow:

The tree, quietly slumbering, is still magnificent against the winter skies: 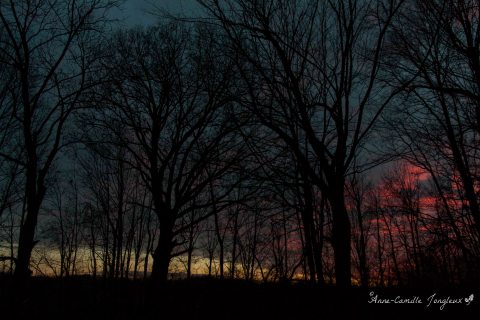 At Sunset, A few nights ago 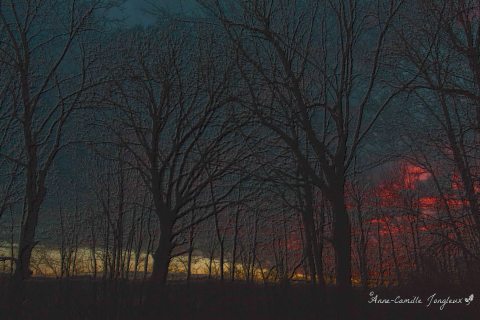 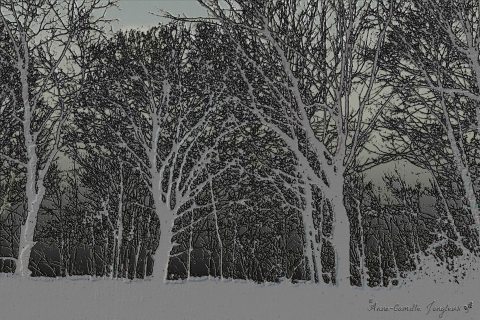 Posted on December 19, 2013 | Comments Off on Rosy-fingered Dawn

I remember learning about literary epithets when studying Homer in the ninth grade.  We only read a condensed version  of the Odyssey, but we were lectured heavily on literary terms that few 14 year olds care about.  “Swift-footed Achilles” was easy to remember because I knew what an Achilles Tendon was; it was easy to associate Achilles with the swift-footed and to use it as an aid for understanding the literary concept our teacher was trying to pound into our brains.   “Swift-footed Achilles”  was my mnemonic for remembering the mnemonic literary device.  But, it was “rosy-fingered dawn” that captured my imagination.  I didn’t believe that I had ever seen a “rosy-fingered dawn” before and was sure that something that sounded that beautiful could never be found on my part of the planet.  Still, as an admirer of sunrises and sunsets, it didn’t take me leaving my teen years far behind before I had a visual memory to tie to a “rosy-fingered dawn.”

I woke this morning hearing my husband gasp.  I was barely registering his voice but the urgency in it brought me quickly out of deep sleep.  I’m glad that it only took a few more seconds to realize that the gasp was not one of horror, but one of awe.  Looking out the window towards the east, we could see this:

Pink trails streaming towards the west

My photographs cannot do justice to the beauty that was this morning’s sky, though I tried.  It was only about 40 steps to retrieve my camera and return to the window.  In that brief span, the light had already shifted.  A few quick releases of the shutter and the right “light” was gone; the entire sky was quickly illuminated with yellowish winter light and rosy-fingered dawn had fled to another day.

Comments Off on Rosy-fingered Dawn 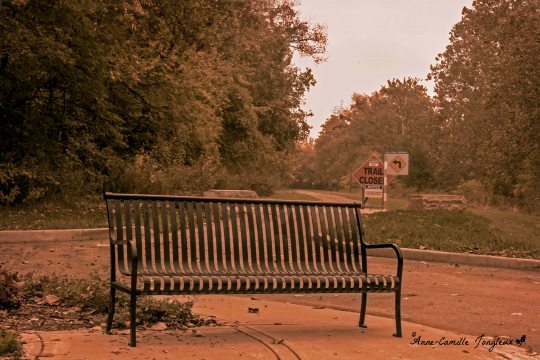 Post your own photo with the theme of “Brown” and then post a link on Ailsa’s site.  Here are a few other participants’ interpretations of brown:

I wasn’t home at the beginning of October and it was nearly mid-month before I got around to doing this installment in my monthly photo project.   Several of the shots  (now deleted) of the big oak behind my house look pretty much like the shots in August and September, although the other trees around the oak tree are beginning to display their fall foliage.  While this was initially disappointing, it made my think about how different the tree can look from day-to-day and hour-to-hour.   Like every photographic subject, it all depends on the light.

I love the sunflares in this image and how it shows off part of the magnificent crown of this tree.

Here is another perspective of the crown, arching above the other trees on the side of the hill.  (For a sense of scale, note the stop sign in the lower right corner.)  The sky today isn’t nearly as blue, but the colder weather the last few days have painted the trees in fiery reds and oranges.   The oak tree, which occasionally becomes a rusty red before turning to its normal russet shade, isn’t likely to change for another four weeks or so.  In the meantime, most of the trees on the hillside will have lost their leaves long before Old Oak begins to shed.

You can find other posts in this project here.

I’ve been gone for a few weeks, spending time with friends, seeing new places, and sometimes just enjoying a beautiful day watching the scenery blur by, in places like this somewhere in Normandy:

A beautiful day in Normandy, near Colleville-sur-Mer

Thank you to all who have stopped by in recent weeks and have enjoyed a virtual meeting with some amazing photographers in the 5+5 x 5 series.  I plan to do another series soon — look for details early next week.

As much fun as I had in my travels, it is good to be home, enjoying the local scenery and spending time with family and friends closer to home.  Hope you are enjoying the view wherever you are.