My son was about 9 when he first started talking about building and flying planes. Maybe, even, he said, he’d build rockets and space-ships. So, it seemed the logical choice when he decided to go to the public university that has graduated more astronauts than any other in the US — Purdue University. 22 Purdue alumni have become astronauts and over 1/3 of all US manned space flights have had at least one Purdue graduate.1, 2, Pioneering Astronauts Gus Grissom and Neil Armstrong earned Purdue degrees, and aviator Amelia Earhart was a faculty member and advisor. It was coincidental that Purdue was only about 70 miles away from our home; my son likely would have ended up there had it been 700 miles away. For the last 5 years, he’s been a Boilermaker, studying Aeronautical and Astronautical Engineering.

Here is a plane that he (and the rest of his project team) built for an international competition recently. Shortly after this picture was taken on graduation night, I heard a rumor that the plane was “borrowed” (by others) to test it’s waterproofness. I think a bubbly, drinkable substance was to be used. 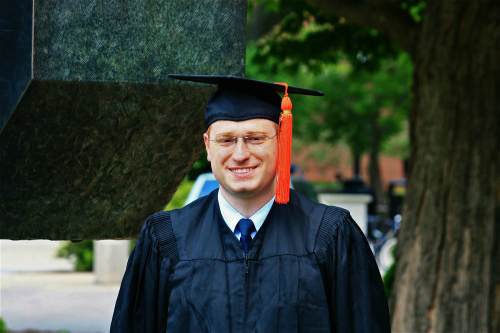 Sitting tall, next to statue of the first man to walk on the moon

On the same day, he was commissioned as a 2nd Lieutenant in the US Air Force.

2nd Lt., Standing next to the “Emerging P” statue on campus

Mom’s favorite portrait of him in AF Service Dress

His next steps are training as an Air Force navigator. Whether the future holds involvement with spacecraft, is something that will unfold in the years to come. I know that his future is bright, whatever he chooses, although a military career is a dangerous one and, as a mother, that worries me immensely. I am proud of him, though, for choosing what he felt was the right path for him. And I’m as happy as can be that he is still pursuing those dreams he has had since he was a little boy, nearly 15 years!

Good luck to you, Ben! I will hold you in my heart wherever you are in the world, or above it in the skies.

This entry was posted in Family, Life and tagged Graduation, PostADay, Purdue. Bookmark the permalink.