Perhaps I was thinking of Thoreau, in keeping with the A – Z Challenge, and today being the letter “T”, though I don’t think that Transcendentalism was in the trajectory of my thoughts this morning.  Although I can’t explain the origin, I had a notion that I would read an essay from a collection I have of Emerson’s writings. Having just done a reorganization of some of my bookshelves, I knew that I had my hands on this book within the last few weeks. Yet, I could not find it.

I started with the non-fiction piles — those books that have yet to make it on to a shelf — scanning the stacks quickly, looking for the thin, tan volume. I couldn’t recall what was written on the spine, although I could clearly picture the stamping of reddish-brown ferns on the covers. When I couldn’t locate it, I went to the fiction shelves, browsing the titles of thin books, skipping over the thick bound books in the case. I knew this book was only about 100 pages. I then wandered to the living room and the bedroom, thinking maybe I had carried this into another room. Not finding it, I went down into the basement where I found this book several weeks ago. Could I have left it down there? I wondered.

When I didn’t locate it, I went back to my office to look again, this time touching each volume in the stacks, carefully reading the titles. Don’t panic! I kept telling myself. Even if you put it in the piles of books to discard, they are still in boxes you have in your possession. They haven’t left the house. It is here somewhere.

While I might get upset if I’ve misplaced something and it bothers me when I can’t remember the location, I don’t get too upset for long over something that is replaceable, such as a book of essays. Each of these essays is likely available in half a dozen formats on the internet — for free. But, this is not an ordinary book.

Back in my mid-20’s, when I was flailing around in the seas of adulthood, trying to figure out how I would swim when I grew up — and slightly embarrassed that all of my college friends who had gone to get their JDs or MBAs seemed to have everything worked out so neatly — I worked for a time as secretary at a local college, administrative assistant to the chairs of the English Department and the University Writing Program. It really was a shit job: demanding prima donnas, pompous asses, and a few pricks. Think of the sexism of Sterling Cooper Draper Price, 20 years later, with less class. A few people would remind me from time to time that I was too smart to be working there, but, at a time of a recession similar to today’s, there were not a lot of options. Although there were some good, kind people who I worked with, most seemed to not notice that they didn’t have to expend much effort to make sure that there was a distinction — a wide gulf —  between the worker bees (which included the non-tenured instructors) and the professors. You could chat for a few minutes at the coffee station over a work of fiction, but then it was back to the boiler room to crank out more mimeos, with all of the professors’ grammatical errors and misspellings corrected, before they met with students that afternoon.

But Ray was different. He was a tenured professor, nearing retirement, who cared about everyone. He would often come into my office (a closet really) when I would go to lunch so that he could type his handouts on his own. He would greet me warmly each morning, sometimes asking if I had difficulties driving into town in the snow. He never complained about the weather, though I sometimes did. It was months before I realized that he did not drive and walked a few miles on either end of the bus line to get to campus. Sometimes he would talk to me about what he was teaching in his grammar and linguistics classes — not to teach me something but to share something that he found interesting. And he listened to what I would say in response to what he was sharing. He assumed that I had a life outside of the office that did not involve operating an IBM Selectric, and although he didn’t ask questions about my life that could be misconstrued as prying, he did acknowledge and ask about my interests.

One day, Ray walked into my office with a poorly wrapped package. This, he said, if for you. With thanks.  He awkwardly handed me the package.  He added: My favorite is the essay on friendship. The book was old, a handwritten name and date on the inside:  6-Aug-44.  I took it gratefully, happy that he would think to give me a book that he had had for a number of years. 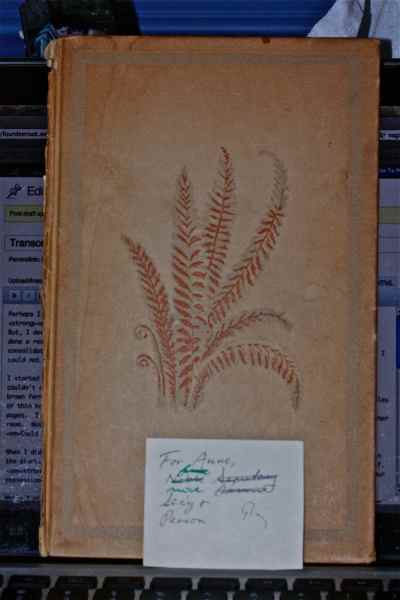 I came across the book a few weeks ago, in a bookcase in our basement and placed it in the bookcase where I finally located it this afternoon.  The binding is loose; although still intact, the outer board along the spine has cracked and fallen off. The pages are yellowed and the deckle edge is worn.  Age spots are on some pages.  I have every reason to believe that I read at least parts of it when Ray gave it to me, though in re-reading On Friendship and On Nature this evening, I can’t recall what  I thought about them when I was 24.  I’m sure that much of what Emerson writes is interpreted much differently through the filter of age, so much that I am now doubtful that I enjoyed the essays then, much less saw the wisdom contained in them.

When I opened the book recently, I found a card with the following inscription: 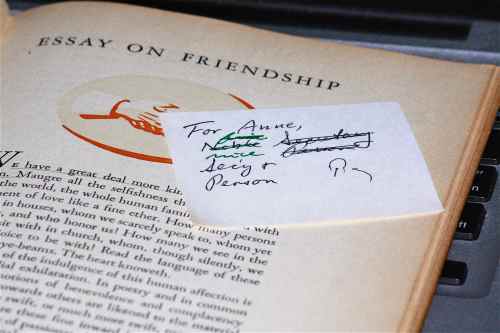 I don’t remember reading that before, but I’m sure that I had.  I’ve placed it back in the book, at the start of the essay On Friendship.  I moved on from that job after about 18 months and I lost track of Ray.  I googled his name this evening.   He died in 2002 at the age of 80.  I learned from his obituary that the name in the book was his first wife, who had died years before.  He was widowed a second time and apparently had no children.  But his memory will live on in the lives of the many students he taught, and people he met, the friends he surely had.   And me, especially when I come across this book on my bookshelves.  According to the internet, similar copies to this book sell for around $10, but, to me, it is a priceless treasure.

We have a great deal more kindness than is ever spoken.  Maugre all the selfishness that chills like east winds the world, the whole human family is bathed with an element of love like a fine ether.  How many persons we meet in houses, who we scarcely speak to, whom yet we honor, and who honor us!  How many we see in the street, or sit with in church, whom, though silently, we warmly rejoice to be with!  Read the language of these wandering eye-beams.  The heart knoweth.

The effect of the indulgence of this human affection is a certain cordial exhilaration.  In poetry and in common speech the emotions of benevolence and complacency which are felt towards others are likened to the material effects of fire; so swift, or much more swift, more active, more cheering, are these fine inward irradiations.  From the highest degree of passionate love to the lowest degree of good-will, they make the sweetness of life.

This post is part of the Blogging A to Z Challenge. Today’s letter is T. Thanks for stopping by. Please leave a comment and let me know what you think. You can find other A to Z participants by clicking on the graphic. You’ll find an index of all of my A to Z blog posts here.

This entry was posted in Life, Reading and tagged Blogging A to Z Challenge, Emerson, On Friendship, PostADay, reading. Bookmark the permalink.

8 responses to “A Treasure”